Merlin Woods –
Raising Community Awareness of Urban Wildlife
On Wednesday 16th December, we will be holding our last talk of 2015. As usual, admission is free, and all are welcome.
Friends of Merlin Woods began in Oct 2012 and through many mediums such as photography , various different events , and litter picks have engaged the local community in the value of the woodland as a resource to be enjoyed by both people and our local wildlife . With a rich biodiversity in an urban setting , Colin and Caroline Stanley of the Friends of Merlin Woods will give a talk on the work that is ongoing in the woodland on environmental awareness and will also be showing photographs of the diverse wildlife the woods has to offer. 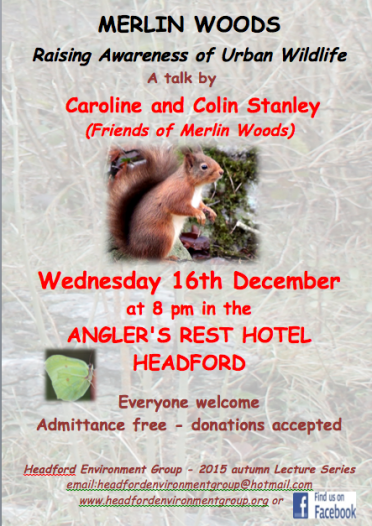 Autumn Talks Are Back!
‘Dermot Breen, Conservation Ranger with the National Parks and Wildlife Service, will give a talk on the Connemara Raven on Wednesday 11 November at 8pm, in the Anglers Rest Hotel, Headford.  Dermot has been monitoring breeding Ravens in the Connemara area for several years now.  Part of this monitoring work includes visiting Raven nests and placing colour rings on the chicks so that they may be identified later on in their lives. This promises to be a very interesting evening with some great photos and we are really looking forward to it.
This talk is part of Headford Environment Group’s autumn 2015 lecture series; admittance is free, all are welcome and we look forward to seeing you there.’

Bat Walk in Cong – All Welcome!

Fundraising Table Quiz
On Friday 27th March @9.30pm, we are holding a table quiz in the Angler’s Rest Hotel, Headford to raise funds for our projects.
There will be a raffle too!
Please come along to support our valuable work.
https://www.facebook.com/events/1381632828825903/

Gardening with Biodiversity in Mind

by Kay Synott of Living Gardens

As more and more habitats for our native flora and fauna are lost, gardens are becoming important havens for wildlife. This illustrated talk will show how to make a beautiful garden that is also wildlife friendly and how to garden in an environmentally sustainable way. Topics will include selecting suitable plants to attract insects like bees and butterflies, how to make a bird-friendly garden and how to include meadows, ponds and hedgerows in a garden setting.

Kay Synott (www.livinggardens.ie) is a qualified horticulturalist, school gardening specialist (working under the ‘Heritage in Schools Scheme’) and garden designer with a particular emphasis on organic and wildlife gardening. Kay has won several awards for her school garden projects.

Hope you can make it along! All welcome!
Admission is free, but as usual we would welcome donations.
On 18th February, 2015 at 8pm  Angler’s Rest, Headford

Final Spring Talk of 2014
Headford Environment Group present our final Spring Talk of 2014
‘Hedgerows in Galway: Networks for Nature’ by Janice Fuller
On Wednesday, 16th April at 8pm in the Anglers’ Rest Hotel, Headford.
Janice will outline the results from the Galway county-wide hedgerow survey and discuss why hedgerows are so important for wildlife, landscapes and agriculture.
Dr Janice Fuller is a Consultant Ecologist with 15 years experience of project management, botanical survey, ecological assessment, data analysis and interpretation, writing reports and publications. She also provides biodiversity and heritage training for Local Authorities and Community Groups. Janice has written many publications for scientific and general audiences. Services provided include: botanical survey, ecological assessment and monitoring, Appropriate Assessment and biodiversity training.
Everyone welcome. Entry is free, but there will be a donation box on the door.
Hope to see you there.
Galway Birds: Seen, photographed and videoed in Galway.
by Tom Cuffe
Tom Cuffe is a Heritage Specialist with the Heritage in Schools Scheme. Bring avian fauna to the national schools of county Galway for the past 3 years. He has a large collection of bird photographs and videos all taken in Galway over the past 15 years. This will form part of his presentation. Tom is an avid bird watcher since an early age when he was in the cub scouts. He leads bird watching walks for Bird Watch Galway on a monthly bases at Nimmo’s Pier. He has given numerous talks and walks all around Galway for a wide range of interest groups.
This talk will take place in the Anglers’ Rest Hotel, Headford on Wed 19th February at 8pm.
Entry is free, but donations, as always, are welcome.

Our final talk for this Spring will be given by Dr Una Fitzpatrick, Ecologist with the National Biodiversity Data Centre.

Bees are Ireland’s most important pollinators and provide a vital ecological and economic service to society. However of the 101 different species of bee that occur in Ireland, around 30 are threatened with extinction and three have become extinct over the last 80 years.

Everyone is welcome. Our talks are free, but any donations given on the night are used for projects of the Headford Environment Group.

Our next biodiversity meeting is on Thursday, 2nd May  in Angler’s Rest Hotel.

Help produce a Nature and Wildlife Plan for Headford.

Such a plan is simply a list of projects that will run over a three year period for the benefit of nature and wildlife in your area, and the environment, and the local community.

Following the success of our talk on Barn Owls, we are delighted to present this talk on bats, stoats and pine martens. Our speaker, works for the Vincent Wildlife Trust, and is a member of our group.

Kate has worked for the Trust in Ireland since 1991. She manages 13 lesser horseshoe bat reserves located along the west coast, from Mayo in the north to Kerry in the south. Since 2010, she has run pilot studies on the Irish stoat in County Galway. She promotes mammal conservation and research through lectures, bat walks and publications. Kate completed her PhD at University College, Galway, on the summer activity of the lesser horseshoe bat. She has a particular interest in the diet of insectivorous bats; her most recent study was on Bechstein’s bat. Kate was a founder member of the Galway Bat Group and is a committee member of Bat Conservation Ireland. Office: Headford, County Galway.

Our final talk for this Spring will be given by Dr Una Fitzpatrick, Ecologist with the National Biodiversity Data Centre.

Bees are Ireland’s most important pollinators and provide a vital ecological and economic service to society. However of the 101 different species of bee that occur in Ireland, around 30 are threatened with extinction and three have become extinct over the last 80 years.

Everyone is welcome. Our talks are free, but any donations given on the night are used for projects of the Headford Environment Group.

We are planning a series of talks in March, April and May of this year, based on various topics related to the environment.

This talk will look at the natural and cultural history of wolves in Ireland. Our speaker has a reputation for being entertaining, and I suspect, we may leave with valuable trivia with which to astound our friends, and win table quizzes.

We are happy to announce that our speaker for April is Elaine O’Riordan, who will be talking on Thursday, 19th April on the topic of Invasive Species. More info to follow.

Finally, on Wed 2nd May, we will welcome Michael Henehan, who will speak on ‘Climate Change: The Science Behind The Spin’.

This talk will attempt to cut through a lot of the nonsense that surrounds the science of climate change and get down to the basics- how does climate change happen, has it happened before, and what has been happening since we’ve started burning fossil fuels. (See below for more).

All talks will take place in the Angler’s Rest Hotel, Headford at 8.pm

Hope to see you there!

Dr Kieran Hickey has written a book on the subject of ‘Wolves in Ireland: A Natural and Cultural History’, Dublin Four Courts Press.

Wolves were a common part of the Irish landscape until 1786 when the last one was shot in Co. Carlow. Wolves had survived longer in Ireland than in any part of Britain. There is substantial evidence for wolves in Ireland include archaeological, place names, , mythology, folklore and documentary data and the existence of the Irish wolf dog. The earliest archaeological data shows that wolves were a feature of the Irish landscape 25,000 years ago. The earliest writing in Ireland from the various monastic annals of the first millennium suggests that the monks were familiar with wolves. This book sets out to tell the story of wolves in Ireland, how long they have been around, where they occurred, how they existed, their relationship with humans and how perceptions of them changed with the arrival of the English in the 1600’s. The new English settlers were horrified to discover that many parts of the country were infested with wolves, as wolves had been eliminated from England prior to AD 1500. The book also plots the extermination of wolves from the Irish landscape and how this was achieved using legislation, bounties, professional wolf hunters and deforestation. Finally the possible uniqueness of the Irish wolf is considered along with the possibility of reintroduction.

Dr. Kieran Hickey is a lecturer in physical geography in the Department of Geography. His previous two books dealt with climate change which is his major area of expertise. These are 2008 Five Minutes to Midnight: Ireland and Climate Change, White Row Press, Belfast and 2010 Deluge: Ireland’s weather disasters, 2009-2010, Dublin, Four Courts Press.

Kieran has published extensively in many other academic journals and chapters in edited books and atlases on many aspects of climate change with a particular interest in Ireland.

Details on Elaine O’Riardan’s talk will be posted shortly.

‘Climate Change: The Science Behind The Spin’.

Unfortunately, it’s often difficult to differentiate the wheat from the chaff with regards climate change science. Too often, opinion is muddled with fact. Too often, climate change is viewed from within a political, or religious frame: a dogma that one may choose to identify oneself with, rather than an empirical fact.
What’s more, even among those who are comfortable that man-made climate change is a reality, there is a worrying lack of understanding about the fundamentals of climate change: how it happens, how we know it is happening, etc.
This talk will attempt to cut through a lot of the nonsense that surrounds the science of climate change and get down to the basics- how does climate change happen, has it happened before, and what has been happening since we’ve started burning fossil fuels.

Michael Henehan, a former pupil of PCH, is currently a Phd researcher, working on  “Ground-truthing the Boron Isotope Proxy” at University of Southhampton, having graduated with an MSci in ‘Paleontology and Evolution’ at University of Bristol.